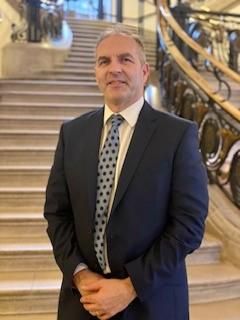 Simon Roberts is CAMORs Director of Security. He is a subject matter expert in protective security and risk, workplace violence, the management of protective security intelligence,  conflict management,  personal security and physical penetration testing. Simon was awarded his certificate in Counter Terrorism Security Management in 2017 and is a member of the Security Institute. Working in partnership with Glasgow Caledonian University he has developed a work-based security Honours Degree in Applied Integrated Security Operations and MBA in Security Operations.  The programme was approved Nov 2019. A member of Metropolitan Police Service (MPS) for thirty years he previously managed protective security intelligence for the MPS, ensuring all received the best possible advice and guidance.  Seconded to the National Counter Terrorism Security Office (NaCTSO) he worked with the CPNI to deliver national guidance on protective security on behalf of the Home Office and Security Service. He was responsible for training 200 Counter Terrorism Security Advisors in the UK to protect crowded places. critical infrastructure, hazardous sites and people vulnerable to attack and targeting. He was the inspiration and project lead behind the concept of ACT E-Learning and National Crowded Places Guidance. He delivered the protective security  to MPs at their homes and constituency offices. Through national exercising Simon led on table-top exercises for sports stadia, the night-time economy and transport infrastructure, seeking to protect and prepare crowded places, businesses and infrastructure against terrorist attacks. He also currently studying for a Masters in Crowd Science at Manchester Metropolitan University.